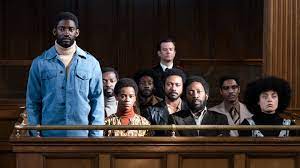 One of the landmark cultural TV events of 2020 was Small Axe. Timely and compelling, this anthology of five films, directed by Oscar-winning film director, Steve McQueen, is a powerful exposition of key historical events and culture of the British black, Caribbean community in London from the late 1960s to the mid 1980s. Over the course of five Sunday evenings, screened on BBC One and accessible to all, these unique films shine a light on historic systemic racism and bigotry inherent in British institutions and society, alongside the power of community activism, education and the cultural joy of music.

Steve McQueen, the son of a Trinidadian mother and a Grenadian father, grew up in London in the sixties. As a filmmaker, what compelled McQueen to produce the Small Axe project was his recognition of a gap in British film narrative regarding this period of British West Indian history. The title, Small Axe, inspired by the song by Bob Marley and the Wailers, captures the spirit of the films as stories of resistance and resilience; as a collective, we are strong.

The third film in the series, Red, White and Blue, highlights the historical significance of racist policing. Inspired by real life police officer, Leroy Logan, played by John Boyega, this gripping film offers a very different perspective on black British resistance. Whereas the Mangrove trial, featured in the first film, Mangrove, was the first judicial acknowledgement of evidence of racial hatred in London’s Metropolitan police force, Logan’s idealism and motivation in switching careers from successful forensic scientist to police officer, stemmed from his belief that his presence could help change racist attitudes from within. The film narrates his experience and disillusionment and is quite unflinching in its portrayal of Logan as a target of racist abuse and discrimination.

The penultimate film, Alex Wheatle, is a true story about this celebrated author, and an intimate portrayal of his tough, early life in care in Surrey and his relocation to Brixton as a young adult. Racism, cultural identity, displacement, and community are significant themes in the film, and we are reminded of, or learn about, some key, historical events which took place in the early 1980s through archival footage: the Brixton riots and the devastating New Cross fire of 1981. A message of Small Axe is the power of education. When imprisoned during the Brixton riots, Alex is befriended by his cell-mate, Simeon, a Rastafarian, who teaches him the value of autodidactic learning; “Reading is what shaped my life. If you don’t know your past then you won’t know your future”, as he hands over a copy of The Black Jacobins, emphasising the power of historical knowledge.

The final instalment, Education, is a shocking indictment of historic systemic racism within the British education system. Set in the late 1960s-early 1970s, this moving film documents an appalling injustice against black school children. While a fictional story, it is inspired by McQueen’s own school experience, when, overlooking his dyslexia, he was placed in a class for students deemed ‘best suited for manual labour’. Education narrates the story of 12 year-old Kingsley, played by Kenya Sandy, who becomes the victim of institutional racism, when, due to a poor IQ score, he is transferred to a ‘special school’, otherwise known as a ‘school for the subnormal’. He is a bright child, good at maths, yet his inability to read has not been picked up. Filmed in a cinema verite style, Kingsley’s story packs an emotional punch. Education becomes a story of enlightenment and resistance through the work of black education campaigners and community workers who expose a deeply rooted cultural bias in the London education system; it was feared that black children were eroding education standards, leading the ILEA to target those deemed to be ‘failing’. A deeply affecting film, Education has contemporary resonance. Only last June, the Runnymede Trust’s report ‘Race and Racism in English Secondary Schools’ called for anti-racism to be reflected in policies and the curriculum.

Enlightening, relevant, and revelatory, Small Axe is a masterful, cinematic exploration of a period of British history that has received little attention, touching on issues that have been brought to the fore recently by Black Lives Matter. The films are captivating in their celebration of British West Indian culture and music; the joyful and mesmerising second film, Lover’s Rock is a delight to watch. While all five films are so evocative of time and place, Small Axe is an important cultural moment.