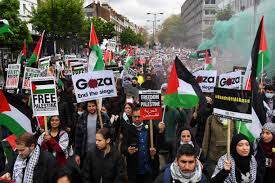 Stephen Beckett looks at the latest Israeli bombardment of Gaza, the UK’s role in it, and the explosion of grassroots sup­port for Palestine.

“In our thousands, in our millions we are all Palestinians” chanted the masses on the demos. The ‘hostilities’ between Israel and Palestine have ceased and life returns to ‘normal’. But nothing is nor­mal, not in Gaza, not in the West Bank and certainly not in Israel. Unless normal means a return to Israel’s reign of occupation, block­ade, apartheid, forced evictions, house demolitions, restrictions on movement, state sanctioned vio­lence and repression are normal.

Sadly, in historic Palestine, this is the normal they experience every day and the Israeli grip on Palestinian lives is getting tighter and tighter.

But Israel’s power over the Palestinians is not only maintained by military force, it is propped up by international support. By far the most significant support – diplomatic, financial and military – comes from the US. In the region of $4bn is given annually (most of which is military aid and bounces back into the US mili­tary-industrial complex). As for diplo­matic influence, one need look no further than the US’s recent obstruc­tion of a UN Security Council state­ment on Gaza that was widely viewed as buying time for Israel’s bombing campaign to meet its objec­tives.

UK governments have also given Israel their full backing and a thriving arms trade exists between the UK and Israel. It is not a one way deal with weaponry, between 2018 and 2020 the UK bought £46m worth of “battle-tested” military equipment (battle-tested on Palestinians) from Israel.

There is also concern that British made military components and hardware were used by Israeli forces during the bombard­ment of densely populated Gaza. British companies are also com­plicit in the construction of illegal settlements in the West Bank as well as aiding the demolition of Palestinian homes. Meanwhile Elbit Systems, an Israeli defence and aerospace company “deliver­ing innovative technology to both civilian and military sectors” has production sites and offices in the UK. Recently, Zara Sultana MP asked Boris Johnson whether UK-made weapons were used in the lat­est bombardment of Gaza – he did not deny it.

But what about Keir Starmer? Nothing but the old clichés of con­demning the violence on “both sides” and lip service for a two state solu­tion. Perhaps Starmer believes that the UK public are not interested in international solidarity but UK public opinion is moving swiftly, significant­ly, and one can only hope, decisively, in favour of justice for Palestine.

The evidence: massive demonstra­tions in UK towns and cities with hun­dreds of thousands taking to the streets and direct actions taken against companies complicit in Israel’s war machine. The Palestinian general strike on May 18th was sup­ported by trade unions around the world, including the TUC. Unite, Labour’s biggest donor, urged its members to join the march on the Israeli embassy in London. In the Midlands, the FBU refused to remove protesters at a weapons factory. Furthermore, Labour members adopted polices supporting a right-of-return for Palestinians and a halt to arms sales to Israel at the most recent Labour Party conferences.

With Labour polling poorly and Red Wall rubble building up, it makes no sense to disregard the issue of Palestine. It should also be remem­bered that BAME votes are a crucial component of Labour’s voting coali­tion ensuring majorities in urban con­stituencies. Ignoring the plight of the Palestinians and the growing strength of feeling in UK communi­ties is not clever politics, it is immoral, just as apartheid in South Africa was immoral. The lesson from the anti-apartheid campaigns – build strong alliances, uphold human rights and international law while building solidarity – organise, edu­cate, agitate.

Failure to speak out for Palestine could mean that UK Muslims take their votes elsewhere. Their support will be crucial if Labour is to hold their seats and not see more bricks in the Red Wall fall.